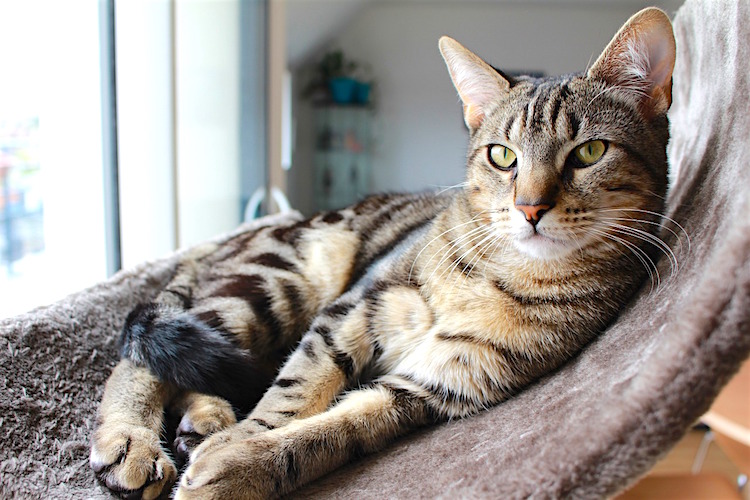 I couldn’t find Bub. Now, this is not generally a big deal; he is extremely shy and takes his time putting in an appearance during my cat-sitting gigs. Bruce, his housemate, is the far more sociable of the 2 Maine Coons.

But this time, not being able to find Bub was a big deal. The cats’ parents had just put their condo on the market, and realtors were popping in and out with their clients. A quiet, quick-moving cat could slip out all too easily.

After a day or 2, Bub showed up at the top of stairs, and I tracked him down to the master bedroom. Apparently every time he heard the real-estate contingent arrive, he would slip behind the waterbed and into the “tunnel” between the drawers. And there he would stay until the unfamiliar presences were gone. He felt — and was — extremely safe there.

It got me thinking, though. How do you keep your indoor cats safely in your home when, for whatever reason, you have strangers coming and going?

Even the sweetest-natured cats retain some of their primal wildness. “God has made the cat to give man the pleasure of caressing the tiger,” novelist Victor Hugo wrote, and he was more accurate in his assessment than he probably realized.

Cats play a dual role in the food chain: They are both predators and prey, and we see some of both behaviors when strangers enter their home.

An indoor-only cat views their home as their territory. Cat trees — or the tops of refrigerators — take the place of real trees, giving them a way to safely scope out intruders. And while there are no caves, a timid cat like Bub can improvise by ducking under or behind a sizable piece of furniture.

There are, however, some other possible reasons your cat disappears into another dimension at an unfamiliar voice, according to the Best Friends website. “Lack of experience with visitors when they were kittens” may play a role. “If the cats were not introduced to people during their socialization period (3 to 9 weeks of age), they may be more apprehensive as adults.”

Or your cat may just be timid by nature, as the Best Friends writer suggests. “Studies have shown that kittens born to fearful fathers are often fearful themselves.”

There’s another possibility, and it’s a strong one if your cat spent any time as a stray: feline post-traumatic stress disorder (PTSD).

A few months ago, my Magwitch managed to slip into the unfinished part of the basement, where the hatchway steps were being rebuilt. When I found him, he was crouching on a high shelf, terrified beyond belief. With some help from my handyman’s teenaged son, I got Magwitch out of there.

Later, I found him resting on a chair in my room, his blue eyes shining. The change in him was nothing short of miraculous — he actually looked grateful.

You see, Magwitch had been found at a construction site. His mother, spooked by all the commotion, had taken off and never found her way back. Somewhere in his Snowshoe Siamese brain, he retained a memory of that place and her unintentional abandonment — things that the noises in the basement brought back to him in a frightening rush.

A Word About Repair People

Most of them, I’ve found, are extremely mindful about not letting your cats out if you tell them. But, remember, they’re lugging toolboxes, buckets of paint and shop vacuums, and it’s very easy for a feline to slip past them.

So here are a few things you can do:

Moving is one of the most stressful things that a person can do. It’s even less fun for cats who don’t get why their world is disappearing into boxes. That’s why some realtors suggest boarding your pets — with a friend, at the vet’s or at a reputable boarding facility.

This shark “cave” looks like the perfect hiding spot for a cat in need of some mellow time:

Around 3 weeks before Tracy Weed put her house on the market, she moved her 3 cats — Toukhee, Yvette and Mavis — into their new home. She drove back and forth between the 2 houses every day, spending the nights with her pets.

For Tracy, it was definitely worth it. Toukhee, a former rescue, could have easily slipped out. Yvette, the Abyssinian, was “very friendly,” and her person feared that “somebody might steal her.”

By the time the bulk of the furniture had been moved, the cats had been in their new digs about 6 weeks. “I just didn’t feel that it was all about me,” she explains. “I needed to get them here. I had to plan, to the extent possible, for my cat companions’ ease in such a huge transition … I had to troubleshoot for them as their guardian and safe keeper. That was the emphasis on overlapping the 2 dwellings — that they could settle in before [I experienced the stress] of the big uprooting.”

Whatever the situation, know that your cats crave a safe space away from strangers and stressful situations, and be sure to provide it for them.

Kittens learn to swim for the first time in the bathroom
Is it Time for Your Cats to Get a Divorce? Here’s How to Rehome a Cat
4 Books for Cat Lovers to Pick Up This Month
Cat with Airplane Ears Showed Up in Backyard, Now Cares for Every Foster Kitten that Comes Through the Door
BABIES meet CATS and DOGS for FIRST TIME!