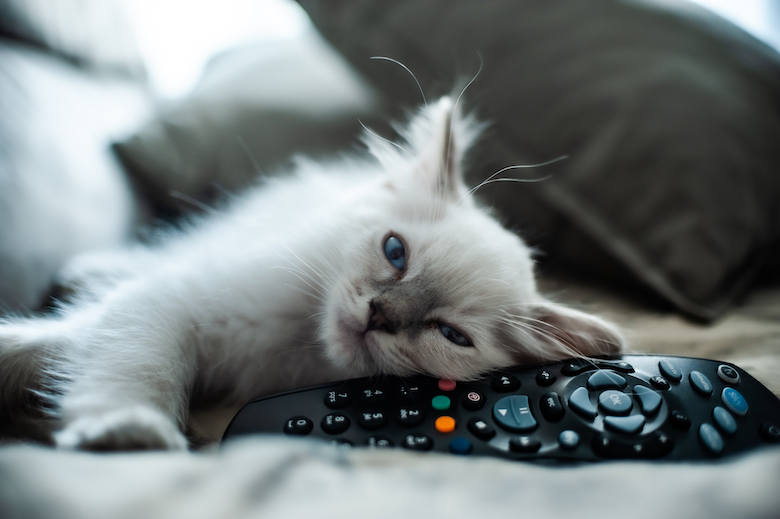 It seems like Cathy Pittman has heard some version of the question thousands of times:  “My cat is so cute. How can we get into the movies? And will we get rich?”

The  Hollywood animal trainer sighs as she tells the story. If anything, the number of people who want fame and fortune for their pet has increased in the YouTube age, when cute – and the next Grumpy Cat – is just a click away.

“So the first thing I always ask them is what happens when they put the cat in the crate to take them to the vet,” says Cathy, the matriarch of the Performing Animal Troupe, which has been supplying animals for TV, movies, and commercials for more than 30 years. Among her credits: TV’s Salem, the black cat in “Sabrina, the Teenage Witch,” which ran seven seasons, and more.

In other words, there’s a reason why Cathy has used what the trade calls a private party cat (owned by an individual, and not a trainer) just once in her career. In fact, most performing cats aren’t an individual, but a team of two or three animals. That allows for cats’ peculiar eccentricities.

“Dogs like to please their owners, and cats like to please themselves,” says Cathy. “ Dogs don’t have to be convinced to do a scene the way cats do. A cat can hide under a table, and there’s not much you can do about it when that happens. And you have to take into account how the actor will react to a cat.”

The other thing to keep in mind, Cathy says – the cat’s owner almost certainly won’t get rich, no matter what stories they’ve heard on the Internet. Prices are fixed by contracts with producers: The trainer gets $50 to $60 an hour, while the owner is paid $500 a day for letting the production use its animal. However, the owner has to split that money with the trainer.

“So finding a cat that will fit for a part off the street? That’s about a one in a million chance,” says Cathy.

Read Next: Partly Sunny With A Chance Of Betty

Stray Cat Brings Her Kittens to Family that was Kind to Her, and Changes Their Lives Forever
Stay Home and Read One of These Great Books for Cat Lovers
INSANELY FUNNY CAT MOMENTS 😹
5 Intriguing Facts About Seal Point Cats
Kitten Found Alone on Street, Takes to Tiny Tuxedo Cat Who Was Rejected by His Mom