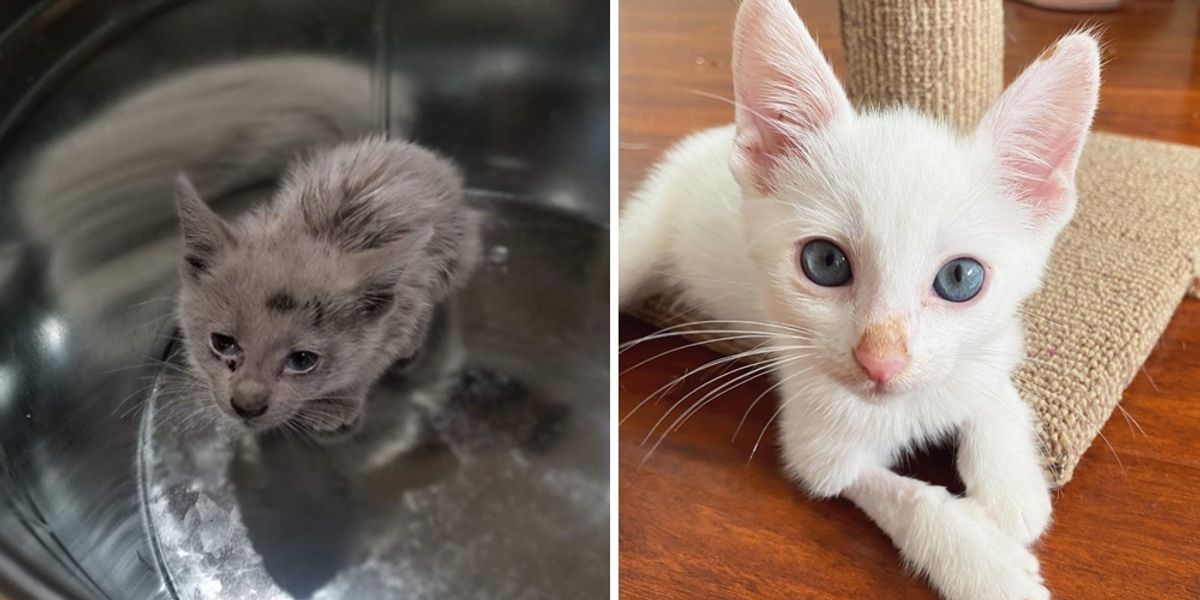 A kitten was found covered in dirt and oil and rescued by kind people in the nick of time.

About a month ago, a Good Samaritan from South Gate, California found a tiny kitten all by himself. He was covered in motor oil, dirt, fleas and was extremely malnourished.

The kind person got the little stray to safety and reached out to social media for help. A groomer from One 4 One Grooming and More picked him up, gave him food and water, and tried to help him rehydrate.

Knowing that the kitten needed immediate medical attention, they sent out pleas to local rescues and hoped someone could come to this kitten’s aid.

The groomer gave the kitten a much-needed bath. They were stunned by what they saw after cleaning all the grease and grime off his coat.

The little guy completely transformed into a kitten with white fur. When he arrived in foster care the next day, they quickly discovered that he had a host of health issues.

The kitten named Laszlo became extremely weak, dehydrated and could hardly hold any food in his tiny body. He was crashing and had to be rushed to the emergency vet.

The little fighter was in and out of the hospital, getting IV fluids and hanging in there with all his might. Despite being so frail, he would meow at his caregiver as if to say he wanted to live.

Jacqueline took him in so Laszlo could receive around the clock intensive care. The kitty had little strength and no appetite, so she fed him with a syringe and provided supplements to keep up with his nutrition.

They turned up the heat for his room and covered the area with soft blankets, so the kitten could stay warm.

Within 24 hours, Laszlo perked up and started to eat on his own. He even sought attention and pets from his caretakers as if to thank them for saving his life.

After multiple trips to the hospital and being examined by four veterinarians, the kitten finally bounced back on his paws and turned a new leaf.

“He was playful and no longer laying at the water dish from dehydration. After a few days, he was gaining weight regularly, and a week later, he completely came out of the woods and returned to his foster family,” Jacqueline shared with Love Meow.

Watch the kitten’s journey in this video:

“We don’t know what was wrong as every test came back negative but he’s doing great now. He’s now a very energetic boy.”

The kitten with blue eyes and white fur turned out to be deaf in both ears. But he can do anything just like other cats, and he lets nothing stop him.

Laszlo has regained his huge appetite and is quickly catching up to the weight he should be for his age. He’s unleashed his unbridled energy and will try to catch any moving thing with so much sass and feistiness.

“We weren’t really able to gauge his true personality when he was feeling so sick, but now that he’s healthy we can report that he is absolutely bananas. He’s a little wild thing,” Kaitlyn Hemphill, foster mom, told Love Meow.

“He can run around the room at full speed for literally hours without tiring,” Kaitlyn added. “When we do catch him in a more mellow mood, he’s a super sweet little guy and a major purr machine.”

Now that he’s back playing and acting like a healthy, rambunctious kitty, he is constantly on the lookout for things to pounce on.

Laszlo likes to stalk his humans’ feet and play-attack them when they try to walk past him. He enjoys scampering around the room as if he’s on a race track.

“He’s a really fun little personality! We’re so glad he pulled through and is healthy and happy,” Kaitlyn said.

Related story: Kitten with Unusual Coat is Taken in By Cat Family After Being Found on Sidewalk