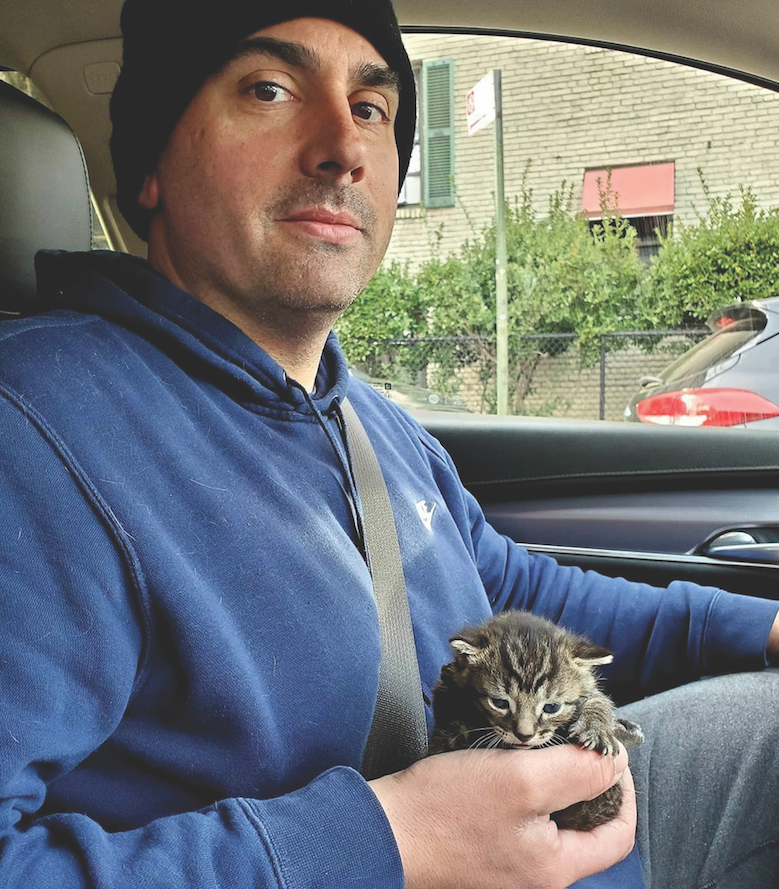 There are often milestone moments in our lives that reshape the path of who we are to become. Such was the case for Paul Santell, a union worker who moved to Queens, New York, in 2011, not knowing anything about animal rescue or stray and feral cats roaming in outdoor communities nationwide. That changed over the years when he noticed cats living outside in poor conditions on his way home from work at night.

In 2014, he fed one, which became two, then three, and before he knew it, he was feeding a whole colony. Several colonies and six years later, Paul has saved and improved the lives of more than 3,000 feral, pregnant and stray cats throughout New York City’s boroughs, earning him the moniker “Paul the Cat Guy” — with no sign of stopping soon.

Jumping in to save lives

He didn’t plan on becoming the Cat Guy, but after about two months of feeding them, he knew he wanted to do more. In the United States, 30 to 40 million stray or feral cats are estimated to be roaming outside, with tens of thousands of them living in New York City, according to the NYC Feral Cat Initiative. Less than 2% have been fixed and a female cat can have an average of 180 kittens in her lifetime.

Paul decided he needed to attend a class held by the ASPCA to learn about TNR (trap-neuter-return) — a humane and effective means for managing community cats. The cats are trapped, taken to a veterinarian to be spayed/neutered, vaccinated and ear-clipped for identification, and after recovery, released back where they were found or, if they’re friendly, adopted out.

Paul had no idea how taxing it would be. He spends nearly 40 hours a week taking care of the cats. “Rescue never sleeps,” he says. “It can be 24/7/365 with no breaks in-between.”
Mornings, he tends to the feral cats in the traps — giving them fresh food and water or transporting them to various vets to be fixed. Any cat requiring major medical is taken to American Veterinary Group or Animal Medical Center as an emergency drop off. Colony feeding is done at night.

He also spends countless hours sharing his nonprofit work with his well over 100,000-plus combined followers on Instagram and Facebook as well as advertising his adoptable cats. He also assists locals, who reach out to him for help with stray neighborhood cats.

Then there are kittens requiring socialization or the friendly strays. Paul has a strict protocol: Kittens do not go back outside, nor do cats who are truly friendly. It can be a gray area, but if a cat shows well, then he has no doubts. The cat will get fixed, tested and vaccinated and will be available for adoption.

Paul is quite particular with his rescues when it comes to finding “just the right, solid, forever” home. He provides pictures and a description of the cat’s personality, age and medical history as best he can along with the type of home the cat would best be suited for on his social sites (@paulthecatguy). For example, sweet but shy Gummy Bear, a young cat Paul rescued, needed a home with no kids, dogs or large open spaces.

Currently, Paul is primarily a one-man operation. He has a handful of volunteers assisting with fostering and transporting cats. His goal is to remain on the streets to continue helping the cats as well as to inspire others, offering them an environment to make TNR and rescue a reality for everyone.

He also aspires to buy a building in the city to teach hands-on rescue tactics and hopes to encourage people to at least manage their own area of the community.

He says, “Imagine if 1,000 people helped versus two dozen in one neighborhood — the population would be under control, which is really the ultimate goal of all rescuers.”

Until then, he is managing his initial colonies from 2014 — all under control due to the success of his TNR efforts. He is also excited about the future, witnessing firsthand the power his social media reach has had with his younger followers. One girl stands out — a 14-year-old who contacted him through Facebook about a cat called Monkey who was living outside for seven years and being cared for by a neighbor. The cat was coughing and sneezing, so the girl reached out to Paul for help as well as to ask how she could become TNR certified to help other cats.

Paul brought Monkey to the vet for medical attention and was informed he had bone fragments in his stomach, a severe URI, high kidney levels (with one kidney enlarged) and is FIV-positive.

Despite that, Monkey was friendly, making biscuits and rolling around for attention. Paul says the worst is behind him, and he’ll do whatever is necessary to get him better and then promoted for adoption. And that’s really all Paul wants, because for him, the greatest feeling in the world is to save lives, because all cats deserve better.