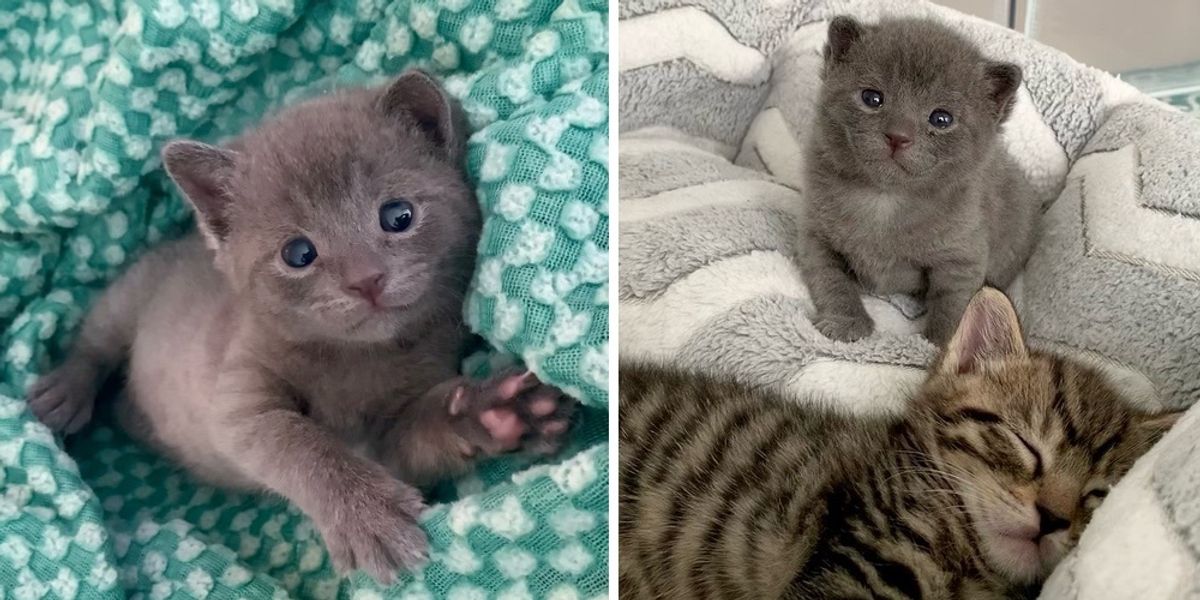 A tiny orphan kitten is so happy to have a warm home and new foster siblings to grow up with.

Jess Thoren, a fosterer and the owner of KittenBnb in Hoboken, New Jersey was at a shelter to pick up three kittens, when she saw a tiny orphan all by himself. The little bundle of fur was younger than the others and in desperate need of a foster home.

The kitten didn’t have a placement yet, and Jess couldn’t bear seeing him alone in the shelter. She immediately stepped up and offered to bring the kitten home along with the original three.

The kitten named Frankie (Victor Frankenstein) quickly settled into his comfortable new abode. At just 250 grams, Frankie needed around the clock bottle feedings and a lot of TLC.

Despite being the smallest kitten, Frankie took to his foster siblings and was determined to keep up with them, not letting anything slow him down. “He’s a week or two younger than the others but is growing fast,” Erik Thoren of KittenBnb wrote.

The sweet kitten is so happy to be in a home environment and have other fur friends to keep him company.

The three other kittens adore him as their own. Since day one, they have accepted their little buddy and included him in everything they do.

While Frankie is trying to figure out his footing, he is a great observer, watching the bigger kittens and learning from the best.

Frankie tries to imitate other kittens when they walk, play and run. He may take a few tumbles along the way, but the little guy is so confident and completely fearless.

After a long play session, Frankie likes to curl up next to his foster siblings and purr himself to sleep. Being smaller in size doesn’t slow him down a bit.

Watch Frankie the kitten and his journey in this cute video:

The brave little kitty is determined to keep pace with the other foster kittens when they play and wrestle. He’s putting on weight and gaining strength, and his personality is emerging.

Frankie is blossoming into a playful, rambunctious kitten with the help of the other cats. They are starting to plot mischief around the house and growing big and strong.

The little cuddle-bug won’t go to bed without a buddy to snuggle with. Frankie prefers wrapping his arms around his foster siblings when they sleep or burying his face in their fluffy coat.

Despite a rough start, the tiniest kitty is loving his new life with his feline friends. In a few more weeks, they will be big enough and ready to look for forever loving homes.

As of now, Frankie continues showering his buddies with endless cuddles and filling his room with his adorable rumbling purrs.

He is still the smallest of the bunch but has a big heart and so much to give.

Jess found little Frankie alone at the shelter and knew just what he needed.

Now, he is flourishing at his foster home, playing and cuddling with his foster siblings.

Related story: Stray Cat Comes Back to Find Her Kittens Who Were Brought to the Shelter