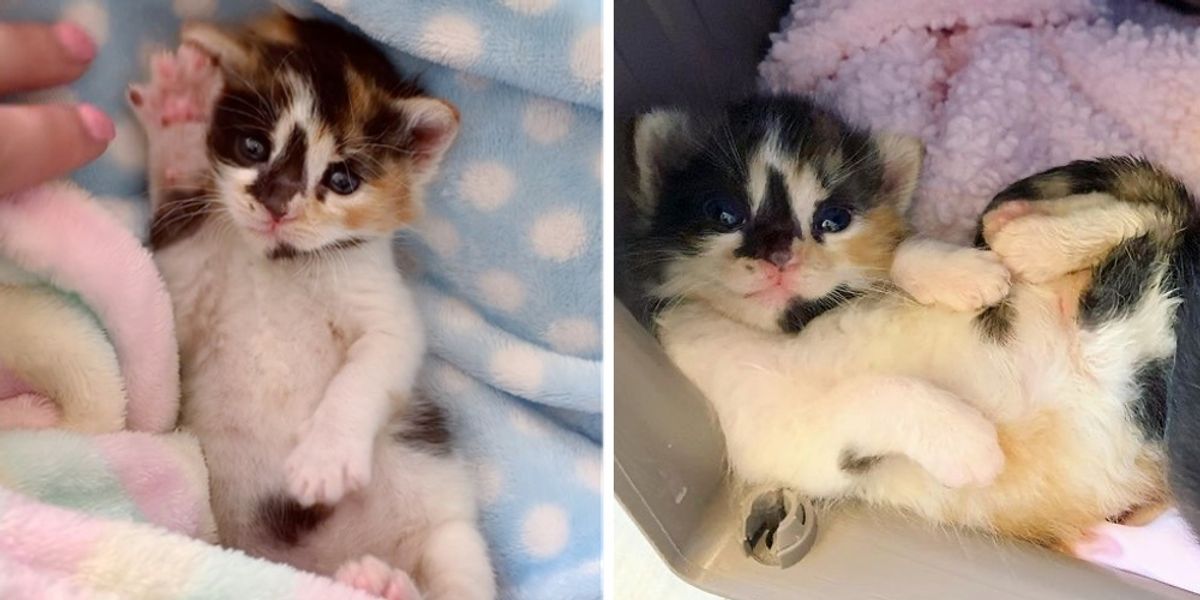 A calico kitten was found alongside her three brothers and rescued just in time.

Caroline Grace, a foster volunteer of Saving One Life (an animal rescue and sanctuary based in Phoenix, Arizona and San Diego, California), was contacted about a litter of kittens that were in critical condition.

The kittens were discovered by a resident in Arizona. “They were only one week old with eyes barely starting to open. Their mom was hit by a car and they were not found until days later,” Caroline shared with Love Meow.

When Caroline got the kittens, they were struggling but fighting to live. “They were hypothermic, covered in filth and fleas. I spent the first three days providing supportive and medical care around the clock.”

The kittens were given the right medication to help combat an infection, much-needed baths to remove all the pesky fleas and supplements to boost their immune system.

Caroline kept them warm and nourished and made sure they were loved. A few days later, the kittens perked up, regained their appetite and revealed their strong vocal abilities.

Doris the calico was in very bad shape when she first arrived, and could barely hold her head up. As soon as she got her energy back, she emerged from a pile of warm blankets, demanding her bottle. Her brothers followed suit and joined the happy dinner choir.

“Doris is the only girl of the group. She has a loud almost raspy voice and is definitely sweet and spicy! She is a great eater and also has an active purr motor,” Caroline added.

The sweet calico quickly figured out how to latch onto a bottle and gobbled down the food like there was no tomorrow. Her brothers followed her lead and ate to their hearts’ content.

Doris’ fighting spirit rubbed off on her litter mates, especially little Wilbur who was the weakest of all.

Through painstaking care, he bounced back and made a complete 180.

“After that, they just continued to get stronger and healthier every day and their little personalities began to come out,” Caroline told Love Meow.

Watch Doris and her feline brothers in this cute video:

“Howie is the biggest and bravest who loves to look in your eyes. Wilbur is a chunky cuddler who just wants to be held and have his face pet. Elmer is such a good boy and sweetheart who loves belly rubs,” Caroline added.

“And Doris is a squishy roly poly who just wants to lay on her back in your lap and get belly kisses.”

“They are all chunky and healthy babies now at 4.5 weeks old and will soon begin the weaning process onto kitten food. They all love to snuggle and are constantly purring.”

The kittens’ vision and coordination have greatly improved in less than three weeks. They all have taken their first steps outside their nest and are starting to explore and play.

Doris the sassy calico has perfected the art of captivating people’s hearts. She will waddle up to her foster mom’s lap, stare into her eyes until she’s picked up and cuddled.

“It’s so amazing to foster neonatal kittens because they make such huge developmental progress in such a short time,” Caroline said. “I feel like they went from sick helpless babies with eyes barely open to chunky and curious little mini kittens almost overnight.”

Doris and her brothers have come a long way and are thriving in foster care. In another 4-5 weeks, they will be ready to find a place of their very own.

“They are little miracle babies and absolute sweethearts, so whoever adopts them will be very lucky.”

As of now, the kittens are busy growing, honing their feline skills, and soaking up the love from their foster family.

Related story: Kittens Found Under House, Bounced Back and Blossomed Through Help from Big Family

Kitten Found on Side of Road, Blossoms into Sweetest Cat and Has His Dream Come True
Kitten Picks the Right House for Help After Roaming the Streets, and Turns into Happiest Cat
Baby Kittens Drinking Milk
Two Super Cute Tiny Kittens Are So Precious Zoomies Who’re Love Play Together After Got Rescued
Kittens — Too Close Two! 2021-01-26